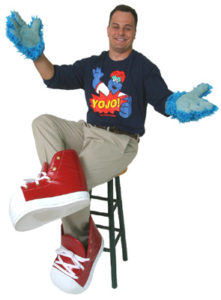 Although YoJo is certainly the star of all his performances, the success of his shows would never be possible without the support of a very dedicated group of talent.

Also appearing on stage with our fuzzy friend is …

Vince is glad to be touring and performing with YoJo for his fourth school year.  When not on stage or traveling with the big blue guy,  Vince enjoys teaching theater to elementary, middle and high-school students in the Washington, D.C. area.  He also acts with various theater companies in the D.C. area.  Vince has performed with Shakespeare Theatre Company, Chesapeake Shakespeare Co., Firebelly Productions and Georgetown University.   He also is a loving housepet owner of 8 dogs, 4 raccoons, 2 bighorn sheep and a skunk. **

Philip will be performing with YoJo for a second straight school year.  He is a graduate from Washington College with a theater degree, and has performed in several plays with Zero Hour Theatre, Glass Mind Theatre Company, and Run of the Mill Theatre in Baltimore.  Philip loves spending as much time as possible on stage, and has taught theater to children at Curtain Call Theatre camp in Easton, MD.  He is also a game show host of live trivia games around the Baltimore area with Finalscore Trivia.  Philip also has x-ray vision and can fly. **

** Some of these facts may be slightly embellished or just flat-out lies.