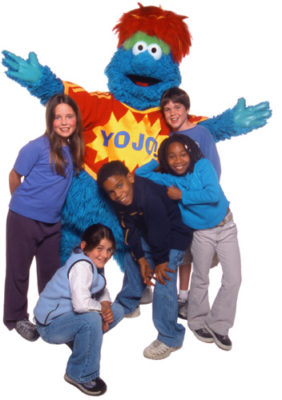 Great Question! This big, blue, wild and groovy creature called YoJo is essentially a living cartoon character and was created to perform motivational and educational comedy shows for large groups of children. YoJo mostly performs at elementary schools, but also for audiences at libraries, parks, camps, and theater events, too.

YoJo is definitely not your simple theme-park character. His personality is MUCH more athletic, animated, and comical. His creator, Bromley Lowe, was a former Major League Baseball and NFL football mascot, and YoJo’s personality and animation is similar to that of a top level sports mascot. However, The YoJo show is much more than a sideshow act at a ballpark.

With the help of additional talent, and the use of new technologies for music, sound effects and on stage video, great possibilities arise for a hilariously educational experience. YoJo’s unique style of “laughter & learning” has now set the quality standard for live children’s performing.